As the mercury rises, it’s prime time to indulge in chilled treats. Luckily, Denver has plenty of legendairy parlors at which to cool off with freshly churned scoops, fruit-studded paletas, and loaded sundaes. Here, 20 of our favorite Denver-area ice cream shops for your summer enjoyment. 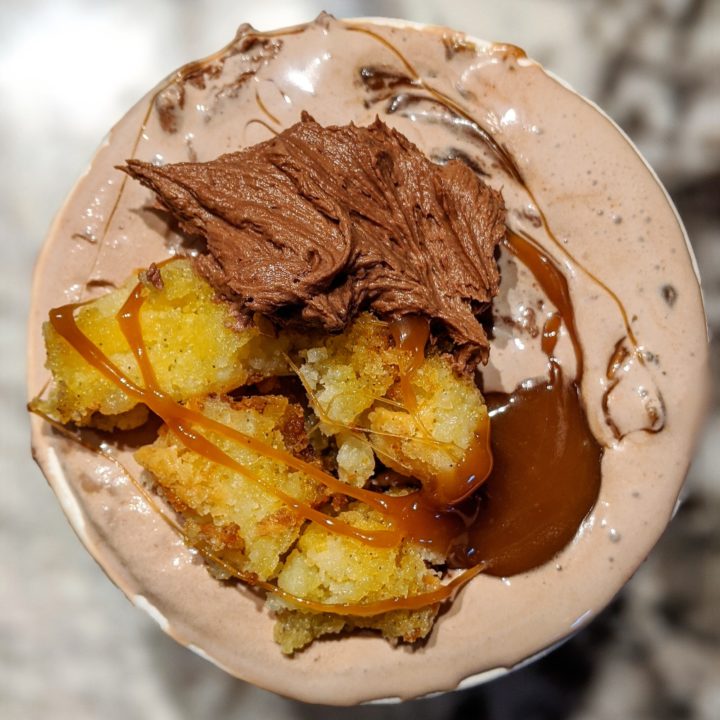 Fair warning: Right Cream’s Cookies & Cream flavor may very well ruin you for all other ice creams. And so will the sundaes topped with the likes of horchata-spiced shortbread crumbles, ribbons of almost too salty caramel, fresh lemon curd, and sherry whipped cream. While David Right’s creative, mix-in-heavy concoctions might be hard to get—his Dairy Block pick-up window at 1825 Blake Street, outside of Foraged, is only open on weekends and during select Rockies games—the extra planning it takes to secure the sweet treats is well worth it. Bonus: Right Cream will move into a bigger scoop shop (read: more flavors and more reliable hours) on Tennyson Street early next year.
Order this: Every one of the four pints on the rotating weekly flavor menu. Seriously, every one of ’em.

Is it even summer in Denver if you haven’t licked a scoop served out of a 28-foot-tall, milk-can-shaped shop? Little Man has become so iconic that it’s spawned spin-offs all over the Front Range—Congress Park’s Sweet Cooie’s, Oneida Park’s Dang Soft Serve, Eastbridge’s the Constellation, Fort Collins’ Old Town Churn, and the West Colfax’s Little Man Ice Cream Factory all fall under its frozen treat umbrella. But head to the milk can for the quintessential taste of Denver summer.
Order this: It doesn’t get much better than a scoop of Salted Oreo.

Five Points-born Sherry’s Soda Shoppe found a second home in Boulder’s University Hills neighborhood in May, bringing owner Joshua Pollack’s 1950s-era soda fountain concept to the foot of the Flatirons. As with Pollack’s other businesses—including three locations of Rosenberg’s Bagels & Delicatessen and Lou’s Italian Specialties—the theme of the shop is a tribute to his family. His late grandmother Sherry inspired both the spot’s name and owl-figurine-bedecked interior. The old-school ambience and menu of malts and scoops are complemented by a roster of modern, boozy offerings, such as spiked house-made sodas, amaro affogatos, and customizable shakes.
Order this: For the ultimate throwback, pair a pretzel cone stacked with velvety mounds of nutty pistachio ice cream with a vodka-infused cherry limeade.

There’s a lot to love about Sweet Action, including the plentiful vegan flavors, the 100 percent wind-powered parlors, the speakeasy behind the Uptown shop, and the flavors that run the gamut from Orange Blossom Mimosa to Chocolate Mint Brownie Blast. And thanks to the Frozen Matter/Sweet Action merging, there are even more locations at which to indulge.
Order this: One of the dairy-free ice cream sandwiches, like the strawberry-filled sugar cookie or chocolate and peanut butter creation.

Bonnie Brae has been closed for dine-in for the past two seasons, so you know it’s going to be a situation over there this summer since it’s back open. Other than the COVID-induced hiatus, the long-time parlor has been scooping for more than three decades, earning fans that span generations and neighborhoods.
Order this: A banana split, preferably with crowd-favorite Cappuccino Crunch involved.

For ice cream purists that prefer their frozen treats on the classic side rather than loaded up with chunky mix-ins and crazy flavor combos, meet RoseBud. Sam Rose started his retail-only Colorado ice cream brand with CBD-infused flavors, but he now focuses on achieving pitch-perfect traditional flavors like vanilla, strawberry, and coffee (all CBD-free). Find the pints at King Soopers, Leevers Locavore, Whole Foods, and other grocers near you.
Order this: Sometimes you just need a perfect vanilla; a pint of RoseBud’s Fancy A** Vanilla will do the trick.

Caitlin Howington blends her pastry chef training with her passion for frozen desserts at Pint’s Peak, her two-year-old ice cream company that just gets tastier and tastier each season. Find her pints in flavors like What the Fig? (goat cheese ice cream with ripples of fig jam and balsamic glaze), Lemon Meringue Pie, and Smoked S’mores at local grocers and farmers’ markets around town.
Order this: Howington nails anything chocolate, so if it’s available, give her Dark Chocolate Tahini with brown sugar sesame seed blondies a go.

With six locations spanning north Boulder to the Stanley Marketplace in Aurora, plus a roaming Moomobile ice cream truck, chances are you’re not too far from a Sweet Cow right now. This is good news, because you don’t want to be too far from their laundry list of flavors (seriously, each location has 20-some scoopable flavors at a time) and special day-worthy cakes.
Order this: A chocolate chip cookie dough (or whatever flavor you’re craving) milkshake.

Ever since the original High Point Creamery opened in Hilltop in 2014, the upscale parlor has been wooing local ice cream lovers with seasonal flavors like Basil with Blackberry Swirl and Orange Creamsicle, as well as the not-so-seasonal staples of Tin Cup Whiskey & Pistachio Brittle and Mint Chocolate Bark.
Order this: The ice cream flight, with your choice of hot fudge or caramel sauce; because five flavors is so much better than one.

Glacier has churned out a whopping 1,000 flavors since its inception in 2001, from the untraditional (Cotton Candy, anyone?) to the classic (Butter Pecan is always a solid choice), with more being added each week. More than 70 of those flavors are available at any time, meaning you’ve got some tough decisions to make.
Order this: The over-the-top Death by Chocolate paired with Salted Caramel Oreo.

Owner/ice cream wizard Curt Peterson makes his own Philadelphia-style (eggless) base, a rarity in the ice cream world, where most makers doctor up a pre-made custard base. This means that Smith & Canon’s flavor combos like Wasabi with Honeydew and Spicy Chocolate are especially on point. Pour some espresso or nitro cold brew over your scoop for an extra buzz.
Order this: Every flavor Peterson dreams up is incredible, but we’re partial to the Foxy Brown, a cheesecake and cinnamon roll mash-up.

When Venice native Guilia De Meo fell in love with born-and-raised Coloradan Bryce Licht, she didn’t want to leave behind her beloved gelato in Italy. And so the couple recreated it here at Gelato Boy, a Boulder-born operation that’s expanded to Denver. Made with less fat and sugar than ice cream, they also use all-natural ingredients and local dairy for their spectrum of gelato flavors.
Order this: Sophie’s Neighborhood Berries & Graham. Besides being delicious, all proceeds go directly to Sophie’s Neighborhood, the Boulder-based nonprofit researching treatments and a cure for Multicentric Carpotarsal Osteolysis (MCTO).

For more than 40 years, Magill’s has been answering the question of just how much Caramel Brownie Fudge ice cream can Lakewood eat. The answer? A whole freaking lot. Flavors like Huckleberry, Horchata, Cookie Butter, and Salted Caramel Cashew have been gobbled up by the gallon too, and fans know that the ice cream options will always be vast and varied.
Order this: You’ve gotta see what the caramel brownie fudge fuss is all about, don’t you?

Martha Trillo’s Heaven Creamery unites the frozen dessert cultures of Mexico, Italy, and the United States under one roof. The Chihuahua native studied with makers in Mexico and Italy to perfect her paletas (fruit-forward popsicles) and gelato, respectively, before bringing her talents to the Denver area, where she has already expanded her empire to four shops. In April, the latest debuted in a brightly lit, blue-and-white-walled space in Lakewood’s Belmar shopping district. At every Heaven location, patrons can enjoy a rainbow of cream-based and nondairy vegan flavors (crafted with Trillo’s lactose-intolerant daughter in mind), all of which are light on sugar and heavy on fresh produce.
Order this: Try the spicy Pineapple-Chile paleta, a cup of Raspberry Dark Chocolate gelato, or a sundae loaded with sliced bananas and kiwis, caramel sauce, and whipped cream.

After High Point Creamery co-owner Chad Stutz tasted eiskaffee—a German-style ice cream, coffee, and whipped cream concoction—in Munich, he was motivated to introduce Denverites to the treat. That’s why he and his wife, Erika Thomas, opened a creamery of the same name inside Capitol Hill’s 11th Avenue Hostel in June. (They also have a nine-month-old stall in Greenwood Village’s Grange Hall.)
Order this: The floats, a decadent, buzzy mix of cold brew steeped with Kaladi Coffee Roasters beans, your choice of Eiskaffee’s ice creams (we recommend the Bavarian Cream), heaps of whipped cream, and grated chocolate.

All three of 11-year-old Denver Beer Company’s outposts have sun-drenched, kid- and dog-friendly patios and more than a dozen beers on tap. But co-founder Charlie Berger added an extra-sweet feature to the company’s newest, 16-month-old South Downing Street destination to appeal to neighborhood families: Yum Yum’s, a small-batch ice cream parlor housed in a former pie shack that had been vacant for some 20 years. Inside, chef Michael Ruiz—who also cooks a lineup of comforting bites for the brewery—churns cheekily named creations such as Citrus Got Real Lemon Tart, Obi Wan Cannoli, and Minter is Coming.
Order this: A scoop of Graham Cracker Porter or raspberry Icy Princess sorbet, then head over to the taproom to make a float with the suds that inspired them.

From build-your-own Taiyaki (fish-shaped waffle cake) ice creams to snow bowls to boba teas, Snowl’s menu is a dessert (and Instagram) lover’s dream. The main draws are the huge, impossibly soft and feathery shaved “snow” bowls, covered in condensed milk and topped with fresh fruit, cookies, cereal, and/or nuts.
Order this: We’re torn between the Black Sesame and Sweet Potato Cheesecake Snow bowls; go with a group and try everything.

When you’re a punk rock ice cream shop, you can do whatever you want, like making an ice cream sandwich out of Pop-Tarts or crushing cheddar Goldfish into ice cream. Besides the creamy stuff, Ice Cream Riot also slings Water Ice, a Philadelphia summer staple that’s sort of like a semi-solid slushie. (Just don’t make the slushie comparison in front of owner Jim McNutt.)
Order this: Any of the cereal-milk-inspired flavors, which run the gamut from Reese’s Puffs to Fruity Pebbles to Lucky Charms.

You’ll need a ticket to get into the Inventing Room’s Sugar Science dessert program, but the extra effort is worth it for innovative treats you won’t find anywhere else, like Mexican fried ice cream liquid nitrogen sundaes with exploding whipped cream, and glow-in-the-dark candies. You won’t find a more magical dessert experience than this.
Order this: Tickets to the Sugar Science dessert program, where you’ll learn the science of sugar while tasting cool treats along the way.

Brothers Matt and Michael Casarez set out to break the Guinness World Record for most ice cream flavors displayed together, so you know the flavors at MC2 are going to go beyond your basic vanilla. They created 985 flavors within six months, including Buttered Blueberry Pancake, Silly Rabbit (a nod to Trix cereal), and Chocolate Cake Donut, selling out of a trailer at events and inside Denver Ted’s Cheesesteaks and Broomfield’s Arista Deli & Coffee.
Order this: The Cookie Dough Inception flavor is one of the best versions we’ve tried, overloaded with homemade chocolate chip cookie dough.

In 2020, Sophie’s Neighborhood—a Boulder-based nonprofit dedicated to finding a cure for Multicentric Carpotarsal Osteolysis (MCTO)—was established by Hosea and Lauren Rosenberg for their daughter, Sophie, who was diagnosed with the disease. This month, participating shops and restaurants—including Sherry’s Soda Shoppe, Gelato Boy, and Sweet Cow—will offer an ice cream or frozen dessert dedicated to annual Sophie’s Ice Cream Social and a portion of sales will benefit the organization. See a full list of participating businesses here.