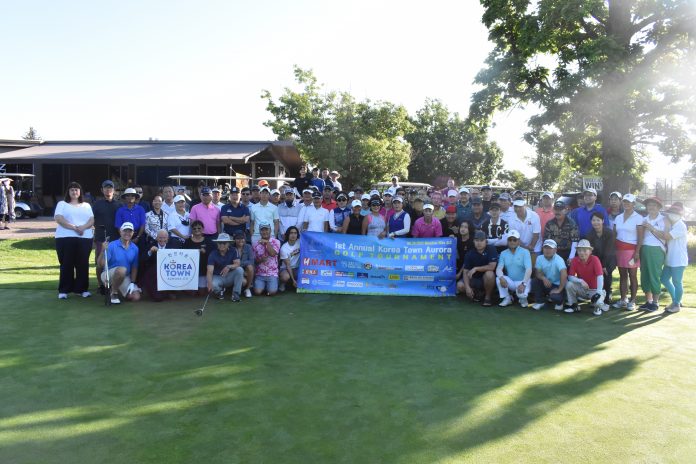 The ‘1st Aurora Korea Town Development Sponsorship Golf Tournament’, held jointly by the city of Aurora and the Korean community, came to an end with the volunteer spirit of many people and the support of golf enthusiasts.

This tournament, which has gathered many Koreans working in large and small golf clubs, as well as golf enthusiasts, who have increased explosively since the corona pandemic, was held with the hope and purpose of wishing to contribute greatly to the ‘Creation of Aurora Koreatown’. As part of the project to revitalize the Korean business and for the purpose of raising funds for the creation of Aurora Korea Town, many companies including this magazine participated in the Korea Town project sponsorship.

About 30 volunteers, including the organizers and students who volunteered for volunteer activities, distributed souvenirs to the participants in commemoration of their participation in the ‘1st Aurora Korea Town Development Sponsorship Golf Tournament’ and had breakfast for the game starting at 8:00 am on the same day. He looked very busy, handing out burritos as a substitute.

Aurora Mayor Mike Koffman, who visited Meadow Hill Golf Course to congratulate the golf tournament on the day, said, “It is very impressive that the Korean community is united to hold such a successful golf tournament despite difficult times. We, Aurora City, will continue to cooperate with Aurora sister cities and spare no effort to support the successful establishment of Korea Town.”

Becky Hogan, the chairperson of the Aurora Sister Cities Korea and Candidate for the Aurora City Council, and Karlyn Shorb, the general manager of the Aurora Sister Cities, said through an interview with this magazine, “I had no idea that so many Koreans would participate. We are very happy that a lot of funds have been raised by bringing the community together with a solid community spirit and Korean golf enthusiasts taking their precious time to participate in the tournament to support the creation of Aurora Koreatown.”

Alexander Lee, president of the catering industry, who worked tirelessly and put in a lot of hard work for this competition, said, “I am very grateful that the city has provided active support and helping hands for the creation of Korean businesses and Korean towns like this.” It is meaningful to actively utilize the opportunity to create a good result for the Korean American community to win-win together.”

The funds raised through the golf tournament will be used for the Colorado public relations infrastructure, such as distribution of brochures introducing Koreatown, printed materials for publicity, and website management. In addition, a promotional brochure for countering Asian hate crimes, which has emerged as the biggest problem in recent years, has been produced and distributed free of charge.

On the other hand, this competition was sponsored by many community sponsors, so prize money and other prizes were very generous. Gold Sponsors of the tournament included Korean BBQ restaurant DAEGEE, H Mart, and Colorado Athletic Association (KASAC). Various souvenirs were distributed to all participants on this day, and large prizes such as Hyundai Palisade SUV, 10,000 dollars in cash, and 8,000 dollars worth of massage chairs were also hung for hole-in-one participants. Dimchae Kimchi Refrigerator, Samsung 55-inch TV, rice cooker for 10 people, male and female golf driver, Aurora regional business gift certificate, etc. were prepared for the lottery and surprised the participants.

The lunch and awards ceremony held at the end of the competition were full of humorous and interesting scenes. Participants and volunteers chatted while eating a hearty and delicious lunch box sponsored by Shinmyeonggwan, and laughter continued to bloom here and there during the awards ceremony and prize draw that followed.

The men’s and women’s champions of the ‘1st Aurora Koreatown Creation Sponsored Golf Tournament’ were awarded to Amelia Lee with 71 strokes, as well as Kang Sung with 71 strokes each.

The women’s champion Amelia Lee is the daughter of Lee Han-won, president of the Colorado Athletic Association, and she showed great skills with a pretty smile and dignifiedness in the competition. In his acceptance speech, Kang Sung-seong said with a humble smile, “I want to express my gratitude to my wife, who is struggling with raising a young child.” In addition, Ga-Young Kim in the Women’s Long Hit Award and Young-Don Kim in the Men’s Long Hit Award respectively won the PXG Driver and Legends Grill Callaway Driver sponsored by Aurora Sister Cities, respectively. Sean Kim became the Grand Prize Winner and received the Dimchae Kimchi Refrigerator.

In addition, the ending of the event was extremely harmonious, with many participants returning home with various products prepared at the awards ceremony and prize draw on the day, and it was enough to be called a place of harmony to unite the Korean community. Thanks to the cooperation of the Korean community and volunteers who devote themselves behind the scenes and willingly invest their precious time, the ‘1st Aurora Korea Town Sponsorship Golf Tournament’ promises a bright future for Korean society and the successful creation of Aurora Korea Town. It ended with applause and cheers.