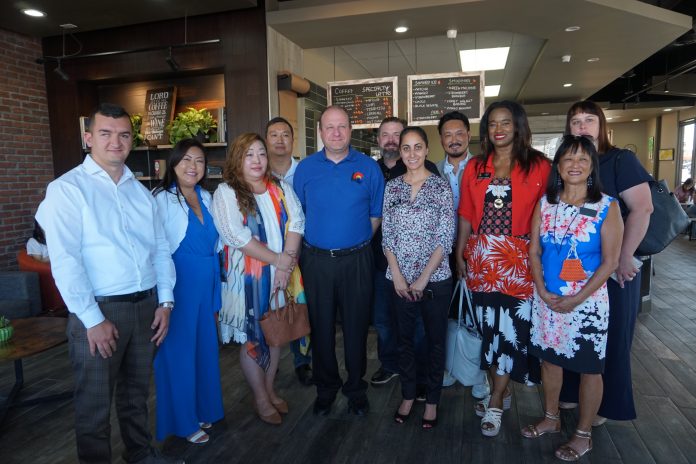 On Friday, the 20th, around 2pm, Governor Gerard Police of Colorado visited Coffee Story in Havana-gil, Aurora, and became a hot topic.

The business roundtable, in which members of the local community also participated, was a meeting between the governor and entrepreneurs with small business owners to discuss the recent economic status, major issues, and problems to be solved in Aurora City.

In particular, this business roundtable drew attention as the governor’s visit was made to businesses that were opened at a time when the economy was contracting and consumption activity decreased due to the corona pandemic.
Governor Gerard Polis drank iced tiramisu latte, one of Coffee Story’s signature menus, and continued to ask questions and discuss with various community members, including President Lee Jong-wook.

The governor also asked about the employment difficulties of local business owners and how wages were set. In addition to Coffee Story, businessman Lee Jong-wook, who runs more than 10 restaurants in Colorado, including Seoul Dumplings, Seoul Barbecue & Hot Pot, Menya, and Wasabi Japanese Restaurant, said, “Currently, excluding taxes, entry-level employees who start by learning to work for the first time are about $14. is paying us $15,” he replied, concurring with the voices of community members that now is a good time to search for a job, as the salaries of employees rise as they gain experience and experience.

On Havana Street Executive Vice President Chance Horiuchi said in a conversation with the Governor, “I understand that many business districts in Colorado are still struggling due to the coronavirus pandemic. The small business owners of On Havana Street have been doing their best to revive without closing their doors despite the economic difficulties.” However, he explained to the governor that many businesses are still facing a serious job shortage, and that “some small business owners work 110 hours a week to find employees.”
Candidate Becky Hogan, who is currently campaigning hard to become the first Korean-American Aurora City Councilor, is also the chairperson of the Korean Committee of Aurora International Sister Cities (Chairman Karlin Shove). actively introduced to the governor. He added that if other peoples or communities in Colorado are interested in local branding, they can always advise.
The governor also praised Koreatown’s logo, saying, “The effort to combine Korea’s colors and beauty definitely stands out.”

Meanwhile, on this day, not only media outlets, but also the Colorado Korean Restaurant Association President Lee Dong-woo (Alexander Lee) and Aurora International Sister Cities General Manager Karlyn Shorb, as well as nearby areas interested in meeting the Governor Residents and small business owners participated in a lively discussion and conversation about the economic situation of Aurora City and the difficulties of business owners and ways to find a breakthrough for about 30 minutes.