Dae Gee Wants to Bring Korean Cuisine to the Masses

Dae Gee Wants to Bring Korean Cuisine to the Masses

He received multiple calls from the show’s producer and undertook a flurry of questions about ingredients and recipes. At first, the inquiries appeared so intrusive that Kim became concerned it was a scam and someone was trying to rip off his company’s food. But he placed skepticism aside. The episode premiered July 2015, three years after the company was founded by Kim and his mother-in-law in the Denver suburb of Westminster.

“Some of that stuff is definitely just for TV ratings in some aspects, but I mean for the most part, I feel the restaurants and places that Guy visits, they’re doing something right,” Kim says. “There is some level of interest, there is some level of doing the right steps and processes to be a good restaurant.”

For Kim, the moment solidified Dae Gee’s place in the restaurant industry and validated his desire to expand Korean cuisine. Since its 2012 debut, the company has grown to five corporate locations across Colorado’s Front Range in Aurora, Denver, and Fort Collins.

Amid this expansion, Kim and his team always pondered whether to franchise because they knew Dae Gee offered a product that hadn’t successfully scaled nationwide. The rough nature of the pandemic pushed them further, and they saw an opportunity with masses of people being laid off and seeking new opportunities.

“It’s panning out that way right now where people are really looking for different investments and opportunities to be in control of what their future looks like for them,” Kim notes.

Soon, Guy Fieri and those in Colorado won’t be the only ones with the chance to taste Dae Gee’s Korean dishes. With the help of Franchise Evolution Partners, a company that equips emerging restaurants with a sales team and recruitment tools, the concept is projecting five to 10 new franchise openings annually starting in 2022. The initial target markets are nearby states like Kansas, Nebraska, New Mexico, Utah, and Wyoming.

Kim says Dae Gee is first looking at regional growth because of food distribution. The restaurant plans to scale with several copackers and monitor food and transportation costs to ensure future operators will be profitable. As of now, Kim says there is no preference between single-unit or multi-unit operators. The ideal candidate should not only have strong financial backing, but also a perseverant mindset, especially given what the industry has gone through in the past year and a half.

“As systematized as we’re going to try to make this franchise concept, and really streamlined, there’s always going to be something that comes up,” Kim says. “In those situations, how the franchisee is going to problem solve, but also we’re going to be there to be that support, but also they’re going to be hands-on on the ground in the restaurants. If there’s one thing characteristic that we want in a franchisee, it’s someone who’s going to be resourceful and they’re just going to find that answer or make a way to figure it out.” 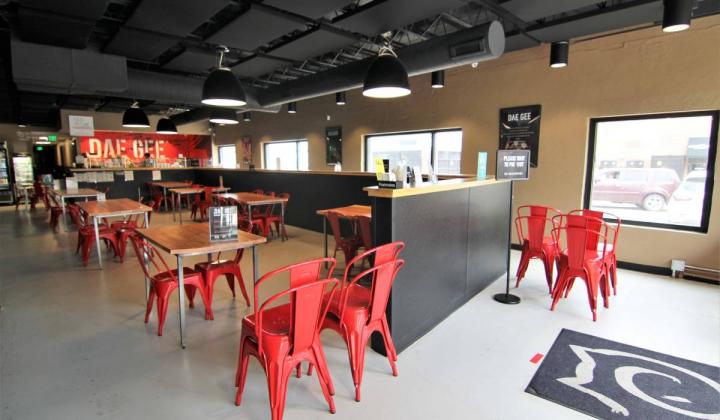 The restaurant’s current footprint ranges from 2,400 to 3,300 square feet, which is compact relative to the rest of the full-service segment.

The U.S.’s desire for Korean food has soared in the past decade. In 2019, Yelp reported that relative demand for the cuisine grew 140 percent in Phoenix, 80 percent in San Francisco, Portland, Seattle, and Boston, 70 percent in New York, and 50 percent in Atlanta, San Jose, Chicago, and Houston. American-based chains have cashed in on the craze. Early in 2021, Shake Shack released a Korean-inspired menu with Korean-Style Fried Chick’n and Korean Gochujang Chick’n Bites and Fries.

A good portion of the attraction can be traced to Korean band BTS, which has developed a large following in the U.S. and around the world. McDonald’s leveraged the group’s marketability to promote a celebrity meal deal in late May.

Dae Gee, which means “pig” in Korean, features offerings like Sogogi Bulgogi, or sliced rib-eye marinated in the restaurant’s exclusive barbecue sauce, and Joomulruk, or boneless beef rib meats seasoned with salt, pepper, and sesame oil. Customers are able to cook their own meat on grill tops at their tables and eat the meats in a bowl, hot stone pot, or as a wrap.

READ MORE: Inside the Rise of Korean Cuisine

The menu items have been perfected over the past decade. When Kim trained with his mother-in-law several years ago, he “eyeballed” recipes as opposed to following repeatable measurements. But over time, he realized Dae Gee’s growth potential within the market, and he knew it wouldn’t be possible to scale unless the back-of-house operations became more efficient. That’s when the company decided to open a central kitchen where everything is prepared and then distributed to individual restaurants.

“All [restaurants are] really doing is putting it together in certain situations, plating it for the customers to cook, and making sure it’s the right [temperature] before it goes out for the customer,” Kim says. “Obviously there’s going to be more room and more areas where we can streamline.”

The restaurant’s current footprint ranges from 2,400 to 3,300 square feet, which is compact relative to the rest of the full-service segment. The upcoming franchises will be even smaller at 1,500 to 2,000 square feet. Kim and his partners chose this size because they felt it was the best range to maximize volume and ROI.

Only 10 employees are required, significantly lowering labor costs. Kim employed this lean staffing model early into his restaurant career because he wanted to be prepared in case most of his employees decided to leave. Although he didn’t have a global pandemic or ongoing hiring shortage in mind when he implemented the strategy, it has served him well in the past several months.

During the peak of COVID, Kim was cooking in the back, taking phone calls, and monitoring the delivery tablets.

“Because we’d been preparing and running our operations and having our labor costs super lean prior to the pandemic, I think that’s what’s been able to help us sustain and overcome the situation,” Kim says.

Although the U.S.’s familiarity with Korean culture has grown in recent years, there’s still much to learn, Kim says. There’s the expansive Koreatown in Los Angeles and a strip of Korean concepts in New York City, but nationwide, Kim says more needs to be offered.

Dae Gee wants to fill that void in the coming years.

“People have yet to really indulge themselves in the culture,” Kim says. “One strategy [for us] is working with PR just getting the word out about hey, there’s Korean-style foods out there. That’s definitely an aspect that we’re strategizing and trying to work on.”

Read the article and more at FSR’s website here.