Since J.W. Lee moved to Colorado 15 years ago, the South Korean–born chef-owner behind Seoul Hospitality Group has introduced many Coloradans to the flavors and dishes of his home country. In Aurora alone, Denverites can feast on late-night Korean eats at ThankSool Pocha K Pub, which serves comforts like spicy stews and soju (a clear rice liquor); bite into a juicy dumpling at Seoul Mandoo; or cook their own meats on tabletop grills at Seoul K-BBQ and Hot Pot.

But Lee’s latest venture—which he opened in LoDO in 2020 and expanded into an empire of three locations, including one with a brewery in Lafayette—is his fastest-growing concept yet. For each outpost, Lee, who was born in Gangneung, South Korea, crafted a menu that blends traditional Korean flavors like gochujang (a spicy pepper paste) and kimchi with American staples like sandwiches and french fries, all of which are tied together with a common dish beloved by both Americans and Koreans: fried chicken.

Lee has a long history in the hospitality industry and trained in South Korea. He moved to the U.S. in the late 1990s, when he says, being a chef wasn’t a prosperous career in his home country. But he learned that it was possible to make a respectable career in the kitchen Stateside.

“When I was a chef in Korea, our country was still kind of poor at that time, and the expectation as a chef was not really great,” Lee says.

He moved to California, which has a large Korean population, and took jobs at sushi restaurants there and in Chicago before moving to St. Louis to open the first Wasabi Sushi Bar in 2003.

“So, at that time I decided I wanted to be treated [respectably],” he says. “[So I thought], if I go to the United States, I can be one of those chefs, and then I [can] achieve the American dream.”

In 2007, he brought Wasabi Sushi Bar to Lakewood, his first restaurant in Colorado. In 2016, he started serving ramen, sushi, and Japanese fare at the first Menya Noodle Bar, which has since expanded to four locations around the metro area. In 2017, he was ready to dive headfirst into Korean cuisine and bought Seoul K-BBQ and Hot Pot. “I [felt] like I can do more,” Lee says. “I have more talent and ambition than sushi.”

Lee isn’t exactly sure why—perhaps because of the global popularity of K-pop and availability of Korean films on streaming services like Netflix—but since then, interest in Korean food has grown, especially in Denver. Though a handful of Korean fried chicken restaurants have cropped up in Aurora in the last five years, Lee wanted to open something downtown, away from the cluster of existing eateries. In 2020, Mono Mono opened on Blake Street, serving fried chicken dishes inspired by the shatteringly crispy chicken he grew up eating back in South Korea.

In South Korea, fried chicken is almost as ubiquitous as kimchi and soju. The comfort food may have been introduced to South Korea during the U.S. military presence in the Korean War, but it was accelerated during the 1980s and ’90s when Korea was introduced to the rotisserie oven and the first Kentucky Fried Chicken outposts opened in the country. Around the same time, cooking oil and chicken also became more affordable, and fried chicken franchises took off. Now there are reportedly twice as many fried chicken restaurants in the country as there are McDonalds or Subways. And Lee says the meal is central to the Korean way of life.

“Korean fried chicken to Koreans…can be a meal, it can be a snack, it can be friends with drinks, or beers,” he says. “It goes well with so many different occasions.”

We asked Lee what he wishes people knew about Korean fried chicken, and what to order at Mono Mono. Here are his suggestions. 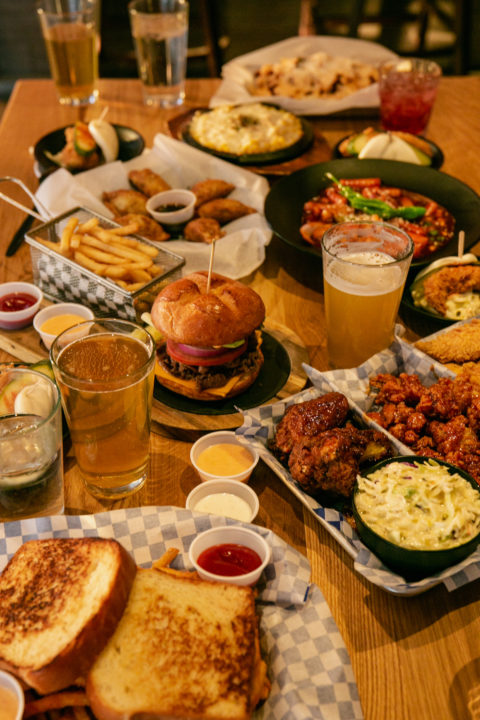 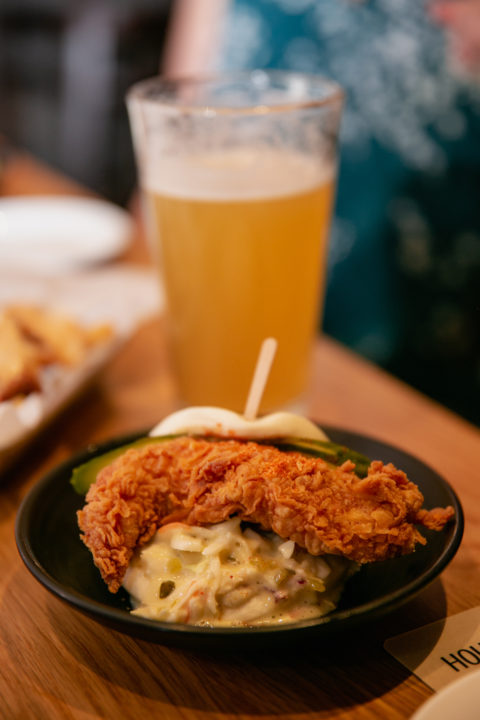 Mono Mono’s fried chicken, much like Korean bulgogi (thinly sliced, barbecue beef), is all about the marinade. After the chicken soaks for 24 hours, it’s coated in a crispy batter or left in the skin to produce a crispy, crackling breading.

Guests can select from a bevy of sauces to coat their bird—including soy garlic, hot and spicy, teriyaki soy, or teriyaki hot glaze—or skip the sauce altogether for a plain fried chicken crunch. The chicken is typically served either as an appetizer on a pillowy bao bun with hoisin sauce and slaw, as a plate of plain-and-crispy or sticky-sweet wings, or as a combination of fried drumsticks and tenders. Fans of handhelds can order the bird between two slices.

Lee’s favorite chicken: the plain, crispy battered tenderloins and drumsticks, coated with spices. “It gives you a kick,” he says.

Kimchi, the fiery, fermented cabbage-and-radish dish, is one of Korea’s most well-known foods and is usually served as a tangy side to main dishes like fried chicken or bulgogi. When Lee began opening Korean restaurants, he wanted to introduce more Korean meats to Americans. What better way than via french fries? Lee says he was inspired by eating meaty nachos at a baseball game, which prompted him to create a kimchi-topped fry basket covered with scallions, aïoli, and bulgogi. Today, he says, the kimchi fries are Mono Mono’s most popular appetizer.

Lee says items like the kimchi fries (and Mono Mono’s also-popular bulgogi nachos) introduce Korean food to those who may be hesitant or unfamiliar with it. “It’s an easy way to try out [the ingredients] and then if they [aren’t as] intimidated, they can try Korean barbecue,” he says.

Rice cakes, steamed pieces of rice flour dough, are one of Korea’s most revered street foods. Lee used to eat them as a child on his way home from school, and guests at Mono Mono can get the same experience via Lee’s chewy rice cakes that have been simmered in a gochujang sauce until they’re infused with sweet and savory spice. “It’s very simple,” Lee says. “But it has tons of flavor.”

Korean fried chicken enthusiasts tend to agree: The best pairing for the spicy and salty meat is a cold,crisp beer, and Mono Mono just started brewing their own versions out of the Lafayette location, which opened in early 2022. Though Lee is only making two house-made suds at the moment—a juicy, citrusy, double-dry hopped hazy IPA and a crisp K-Pop Pils rice lager—both pair perfectly with a round of chicken.