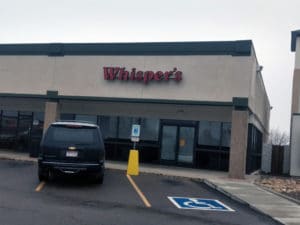 THE SPECIAL DRAWING:  The new Whisper’s On Havana hopes to be open in early March 2018. To celebrate the reopening of Whisper’s and to try to get their customer base back, the Havana Business Improvement District is sponsoring a drawing for a $200 Final Four Party at Whisper’s. We will have an entry box set up in Whisper’s once they open in March.  Stop into Whisper’s before March 30, 2018 to enter the drawing for a chance to win. No purchase is necessary and the drawing will take place the afternoon of March 30 with the winner notified by phone.

For many years, Whisper’s had been doing business in the Birchtree Center at Jewell & Havana.   Whisper’s was originally owned and operated by Terry Forehand and her husband.  After Terry’s husband passed away, Terry ran Whisper’s with the help of her son Dustin Forehand.  Dustin is the new GM and has been overseeing the build out of Whisper’s in their new location.

The new owner of the Birchtree Shopping Center informed Whisper’s that he was not going to renew their lease at the 1930 S Havana location and that they needed to be out of the space by the end of December 2016. We have a very low commercial vacancy rate in the Havana District and there were no other appropriate spaces available that would accommodate Whisper’s, so all of the restaurant equipment, tables, chairs, etc. were put into storage. After several months of looking for a new location, Kevin Hayutin, the owner of the Buckingham Village Shopping Center, stepped up and worked with Terry and Dustin on a space in his shopping center at 1535 S Havana, directly to the west of Denny’s. However, that tenant space did not have a kitchen, so Terry and Dustin needed to build out a full commercial kitchen and modify the space to work for their business in order to reopen. This is a very complicated and expensive process and has been described by some as, “the slowest opening ever!” Persistence is the word.

Whisper’s had hoped to be open last December, then it was by New Year’s Day, then it was by Super Bowl Sunday, and then they stopped making predictions. Electrical inspections, plans modifications, health department inspections, etc. have delayed the opening and expenses have been adding up. In early February, a group of loyal Whisper’s costumers and friends showed up with paint cans and brushes to roll up their sleeves, hang shelves, and paint the beautiful cityscape backdrop for the new stage (pictured).